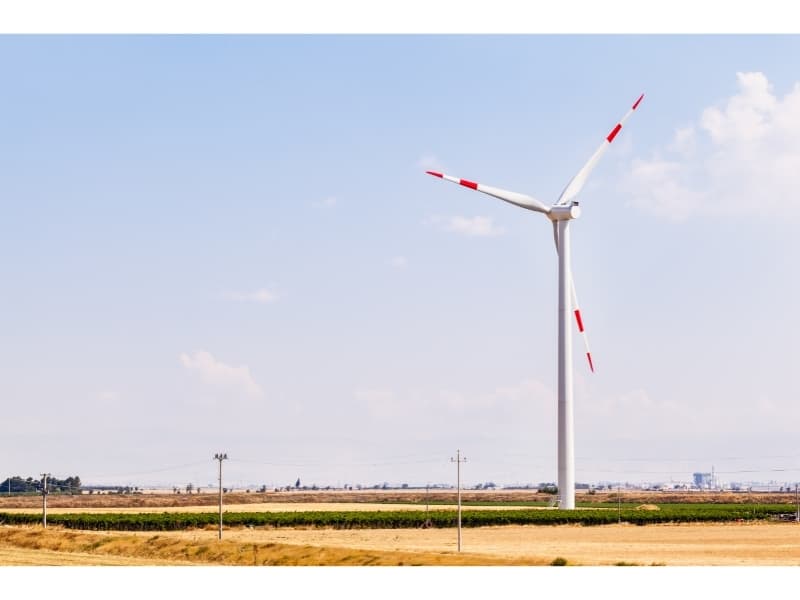 Wondering why do wind turbines have three blades? Our world is becoming more and more filled with landscapes of wind turbines.

Read on to understand how wind turbines work to generate power efficiency.

1. So Why Do Wind Turbines Have Three Blades Instead Of Six

Wherever the wind blows, the question of why turbines have three blades instead of six is asked. They have three blades because they were not originally intended to be operated at this maximum efficiency; rather, it was thought that a single very large blade was enough to maximise efficiency.

From an engineering perspective, however, these three-bladed machines are easier to build and less energy-intensive to assemble. But the same principle is used by a wide range of rotating machines.

First, it’s good aerodynamics; the three pairs of blades they create much less drag than more blades. Hence they will spin faster with less torque.

Second, you get better wind energy density. Three pairs of blades increase the surface area, and because they’re three individual surfaces, they’re more stable. Wind moves them along, but they stay very stable.

2.Can Wind Turbines Have 4 Blades?

It really depends on the type of configuration that the generator attached to the windmill for blade type and number of. Some generators are lower sped and others are higher sped. The more blades you have the slower the wind speed to turn the generator. Four blades could purpose an issue and still create a bit of a wobble effect. These are all factors to take into consideration for making the purchase on your wind turbine.

3.Does The Number Of Blades On A Windmill Matter?

Yes, absolutely the number blades on the wind turbine matters it is substantial. Larger commercial and industrial with turbines have three blades this is so they can have less mechanics and smoother aerodynamic flow.

However smaller turbines the residential and small commercial kind can have multiple blades. The more blades you have the more torque you will have and the slower the speed this definitely plays into the gear ratio of the generator.

All gear ratios of generators are different and according to what voltage they displace. With more blades the generator will start at a lower wind speed with more torque. However will be topped out and need to be deferred or braked when the winds get too high.

FOR MORE ON SOME OF THE WIND PRODUCTS WE RECOMMEND

4. Should Wind Turbine Blades Be Heavy Or Light?

If it’s your job to design wind turbines, you may be inclined to use light- or heavy-duty blades. In the world of commercial aviation, where heavy engines are a must, the opposite is true.

Boeing aircraft, for instance, include as many as four fuel tanks, and the Boeing 747 weighs more than 100,000 pounds. To avoid the classic example of burning extra fuel, the designers of the 747 had to design a fuel-efficient plane.

At the same time, they kept the 747’s weight down by using lightweight materials and keeping weight on the wings. If you’re an engineer designing wind turbines, you likely want to find the most efficient blades for your design. Heavy-duty blades are a great way to save money in the long run.

Wind turbines are the opposite lighter is better from construction material and efficiency of air flow. With less weight requires less wind speed to start operation as well. Most larger wind turbine blades are made of a composite meshed fibreglass.

5. What Is The Best Length For A Wind Turbine Blade?

It is however, not used to pump water, so when building a new wind farm, the size of the turbine often needs to be carefully judged.

The blade length of the turbine will actually very according to the number of leads used on the turbine in the performance and specifications of the generator. It’s hard to give you a specific answer is they all vary in range. However the more kilowatts the large of the blades.

6. Why Are Wind Turbine Blades So Thin?

Wind turbine blades are so thin because of two reasons: – Waste of material – Feasibility of aerodynamic flow 2). Feasibility of aerodynamic flow The thinness of a wind turbine blade depends on two factors: – the ratio of wind speed to rotor blade diameter (the wind speed has to be high enough for the blades to be placed at a sufficient distance from the wind speed).

The aerodynamic efficiency (the efficiency with which the wind moves the blades to maximize the energy extracted).

Wind turbine blades are also thin for their weight. The rule is to keep the weight as light as possible for the size turbine.

This keeps the blades is there a dynamic as possible so they can slice through the wind. There’s also reduces drag and noise which is the swishing noise that everyone hears coming from larger turbines.

The blades yaw or pitch more or less into the wind to stop or keep the generator at a consistent speed. This is why you see sometimes large winter vines stopped altogether the wind speed is either too low for them to operate or too high to operate safely.

7. What Is The Best Angle For Wind Turbine Blades?

Wind turbines are used to harness the energy in the wind into electricity so that it can be used or stored. Wind turbine blades rotate around a turbine axis at a constant speed. The angle of the blades when they’re installed on the turbine determine how much power from the wind is converted into electricity.

As a general rule anywhere from 15 to 30% pitch is the optimal point to catch the wind of a turbine. Going to 45% pitch is a little extreme although you do see it in some cases keep in mind that most larger winter turbines a variable pitch according to wind speed.

8. What Happens If Wind Turbine Blades Spin Too Fast?

They create clean energy by harnessing wind power. However, the blades on some wind turbines might be spinning too fast. This can cause the turbine to fail and even stop working altogether. Let’s take a look at what happens if the blades spin too fast on a wind turbine.

While the blades on a wind turbine are designed to spin at a particular speed, there is an upper limit beyond which the turbine would be in danger of breaking and need costly repairs. Knowing this can help you make sensible decisions about where to place your turbines as they could break if they spin too fast.

In addition if they spin too fast they can over speed and end up being destructive. There are a number of braking systems or your stalling systems that prevent turbines from over speeding.

You can also have issues with generator over speeding producing too much power for short periods of time. This results in electrical equipment failing so the situation all around it’s not a good one.

Safety measures for cheer turbines are put in place to stop them from over speeding. On a smaller turbines they usually have a water y’all pitch or tail that knocks it out of the wind when it gets to a certain speed.

On larger turbines the blades themselves your pitch in and out of the wind and adjustable according to the wind speed. These are more stable and consistent and used in larger turbines because of the variable speed of the turbine.

9.Why Are Wind Turbine Blades Curved?

The blades are curved because they create more lift. They do this by increasing the length of the blade’s arc through the air.
This is done in two ways: The first way is to curve the blade and slow down the tips of the blade as they slice through the air.
The second way is to curve or bend the spanwise leading edge of a wing, which can be seen when comparing an airplane wing to a car wing.

This is done by shortening the spanwise distance from one tip to another tip, which increases lift as well.

Modern wind turbines are essential to the development of renewable energy. They generate clean electricity that is important for a healthy planet. The blades on these turbines are curved because they’re designed to catch more wind and turn it into energy.

The curve creates an airfoil shape, which allows the blades to work better in higher winds. Wind turbines are a great way to generate electricity, but they also pose some challenges.

One of these is that the blades are often spinning at high speed, and they can interfere with each other and slow down the whole rotation of the turbine. To counter this problem, the blades are curved. This way, when one blade is in front of another, it’s not a problem for either.

This article goes on to discuss more about why wind turbine blades are curved, as well as how this impacts energy production and efficiency.

10.Why Do Wind Turbines Catch Fire?

The reason you see wind turbines and blades catching fire is due to mechanical failure. Internal electrical components inside large turbines can fail and sometimes too. The result is overheating and it’s fire.

Most of the blades on larger turbines are made of a conversation mix with fiberglass. This does have an epic mission point in which you can burn. The other large culprit to wind turbines catching fire is actual lightning strikes. Lightning strikes or millions of volts and will incinerate anything that they come in contact to.

So from time to time you will see on the news the wind turbine catching fire and burning. In rare occurrences wind turbines can malfunction mechanically and over speed. This overspeed can also cause the winter mine to blow part or excessively overheat and cause fires well.

We hope you like some of the valid points from this article please check out our other articles for much helpful information.

Check out some of the new products we recommend here