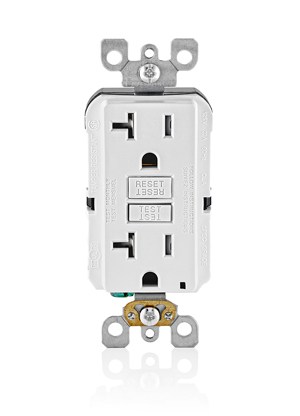 Are you wondering why your gfci outlet test button won’t push in? We can help answer those questions and come up with a solution.

A GFCI outlet test button won’t push in due to a malfunction of no power or replacement is needed. Usually the gfci outlet will flash letting you know it is time to replace it.

If your GFCI outlet test button won’t push in that most likely means that the GFCI needs to be replaced.

If the GFCI is older and loses power they can easily stop working.

Try depressing or press the reset button and then the test button.

Sometimes you have to push on these quite hard in order to get them to work.

The end of your finger sometimes on older GFCI‘s may not be suitable.

You may need to try a blunt object like the end of a screwdriver.

Keep in mind not to beat the GFCI till it breaks only till it depresses in.

In any case do not force the GFCI with a screwdriver because you will simply break it as it is made of plastic.

There’s a spring mechanism inside the test button and the reset button that needs to reload.

If this becomes corroded then it will stick, which is why it takes more energy to push in on the reset or test button at this point.

If you have one of the older style GFCI receptacles that has the red test button.

You should take it upon yourself to have it replaced anyways because those type of GFCI receptacles are now out of date.

TO SEE THE GFCI OUTLETS WE RECOMMEND

If you’re GFCI reset button won’t push in that means that you either have a faulty GFCI or there is no power to the receptacle.

If there’s no power to the receptacle then you will need to check your power panel to make sure the breaker is not tripped.

This could also mean that you may have a fuse blown. In addition to this you may have a hidden switch because the GFCI receptacle might be on a switch.

This is common for outside plugs and bathroom plugs.

Often electricians will put the bathroom outlet on with the light switch in the bathroom.

You need to have the bathroom light turned on in order for the GFCI plug to work.

Sometimes people switch their outside plugs for Christmas lights. So check your switches by your outside doors or behind the door.

Why Is The Red Light Flashing On The GFCI?

Some brands of GFCI receptacles have flashing red reset lights on them.

When the red when the light is flashing is this means it’s time to replace the GFCI receptacle.

This just means that it could be tripped and needs to be reset.

Unfortunately when you see it flashing there’s nothing you can really do to get it to reset without replacing it.

We see this often after receptacles exposed to moisture and it causes the GFCI to malfunction.

Some brands of GFCI receptacles have green lights only on them.

There is no red light to flash. This green light is on all the time when it indicates that the GFCI receptacle is working correctly.

When the GFCI goes out for the reset button or test but needs to be pressed than the green light will go out.

Why Does The Breaker Keep Tripping When I Reset It?

If the GFCI receptacle or the GFCI breaker keeps tripping every time you reset it then it is picking up a ground fault.

Ground faults could be caused by any number of things.

Moisture in the breaker itself. Moisture or a bad ground in whatever you’re plugging into it.

Try multiple different items to plug in to see if it keeps the GFI from tripping.

If the GFCI trips it’s nothing plugged into it then you may have to dig deeper.

All The Breakers Are On And Still No Power

If all of the breakers and fuses are good and you still have no power to the GFCI then you either have a faulty GFCI or you have a hidden switch.

You could also have another GFCI protecting the GFCI that you were trying to reset.

This is not a standard practice for us to wire these like this however we have come across it before.

If the first GFCI is protecting the second GFCI then this can cause what we called nuisance tripping.

Nuisance tripping would mean that the first GFCI was tripped giving the appearance of the second GFCI not to have any power.

In this case before you call your local electrician we recommend that you go around and reset all of your GFCI’s within your home.

Why Does It Trip With A Cord Plugged In But Nothing Else?

We have seen a number of cases where the actual extension cord or cord that you’re trying to plug into the outlet is faulty itself.

In this case please check the cord or try a different cord and you will find that it will get rid of the problem.

If the cord has been laying outside or get any amount of moisture in the cord then you’ll need to lay somewhere in the sun to dry it out.

In order to keep it from dripping when you plug it into the outside GFCI.

Some of these cords will have plastic molding installed over them with a rubber housing to keep the moisture out.

Try to keep the cord up from laying in low lying areas or areas that might result in moisture.

If you have them plugged into outside Christmas lights or anything else.

Especially where the cord plugs into the Christmas lights and the termination is done make sure that is up and has a plastic bag over it to protect it.

How Come It Only Trips When It Rains?

Sometimes the outside outlet GFCI’s have covers on them that do not seal properly.

If they do not seal properly and they are facing the weather or exposed to the weather and water or moisture can seep down inside of the cover.

The GFCI will then detect it and cause of the trip.

That usually only happens in rain storms and doesn’t happen during normal conditions.

In addition if you have cords or anything else plugged into it and the outlet detects moisture during a rain storm it will also cost of the trip.

This can also be caused by garden lights plugged in to the outside receptacle.

If you have garden lights especially low-voltage ones with a transformer and the transformer happens to get wet due to a rain storm this will cause the GFCI trip.

Why Does Everything I Try To Plug In Trip It?

If you’re having an issue with the GFCI tripping because of everything you’re plugging into it this means that the GFCI is wired wrong.

Two things will happen when the GFCI is wired wrong.

It will trip instantaneously with every load that’s plugged in.

Or the lights will be on and it looks like it’s working but there’s no power to the GFCI.

This means the line and load have been reversed on the back of the GFCI in the line power coming from the panel has been terminated on the load side.

This causes the GFCI to think it has to work backwards but it doesn’t detect the ground fault properly.

It causes a GFCI to continuously trip. At this point we don’t recommend you do it yourself.

Why Am I Having To Replace The GFCI So Much?

There are different quality GFCI receptacles.

You can also install a GFCI breaker right in your panel to eliminate the problem completely.

If you have a fuse panel and installing a GFCI breaker is not an option then you can find more here on some of the better GFCI’s that we recommend.

One of our largest pet peeves and service calls is for reset GFCI’s.

We get these calls at least a couple of times a week and it is common in most households.

It’s important that you know that you’re not alone.